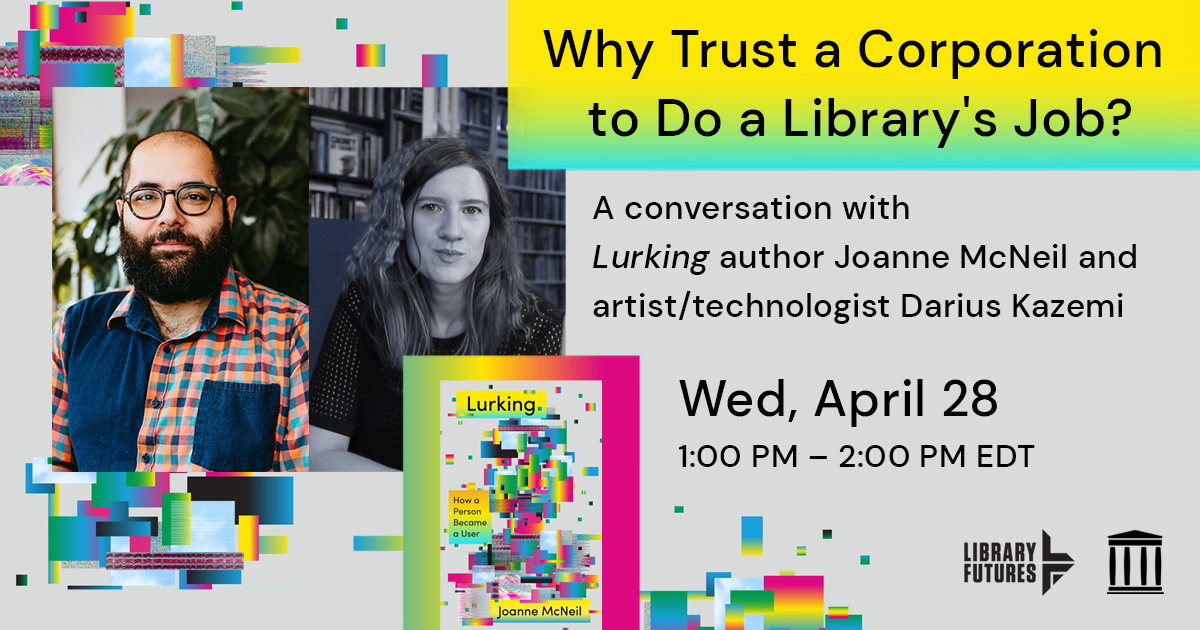 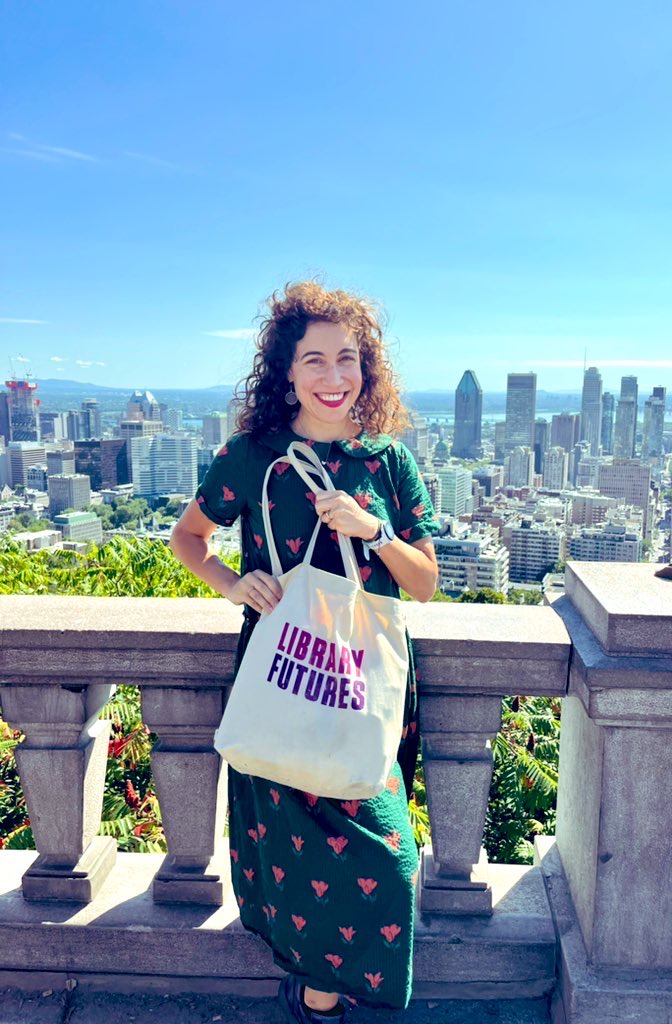 “Librarians are what the internet is aching for—people on task to care about the past, with respect to the past and also to what it shall bequeath to the future.”

– from Lurking: How a Person Became a User by Joanne McNeil

Joanne McNeil is a writer, editor, and cultural critic of and for the internet. The author of Lurking: How a Person Became a User, she chronicles the history of the web through the messy humanity of the chat rooms, social media, and online spaces from the 1990s to today. A work that channels the intensity and intimacy of early internet communities, Joanne's book is a timely, provocative work of tech criticism that reexamines the social implications of technology as part of daily life. Throughout her work, Joanne utilizes the library as metaphor, considering how the design of social platforms could better facilitate the pro-social aspects of questioning, information seeking behavior, and preservation that libraries espouse over anti-social patterns of surveillance, profit, and harassment that plague the internet as we know it.

Joanne generously answered four questions for us in advance of April 28th's Why Trust a Corporation to do a Library's Job event with technologist/artist Darius Kazemi and our partners at the Internet Archive. Be sure to purchase Lurking in advance of the event – the first fifty book buyers get a signed copy and a special chance to meet Joanne and Darius after the talk.

How can the public sector – like libraries, schools, and nonprofits – contribute to good citizenship on the social web?

Right now the history of the internet is in a vulnerable place. Up until about five years ago, there were only a few writers covering the internet and its labor, culture, communities, and politics. “Tech” was considered a niche subject and publications largely did not allocate resources to its coverage. Consequently, the ‘first rough draft of history’ that we tend to expect from the media has a lot of holes in it.

This is an ongoing problem because young staff writers now who have just been assigned to the tech beat probably do not have senior colleagues who can give them context for a company like Facebook or forms of social media that have emerged over time. We can’t expect journalists on tight deadlines to read every internet history book ever written and the lack of context and mentorship available to them means that reporting on the tech industry is too narrowly focused on its present and fantasies of its future. Silicon Valley giants, meanwhile, are working overtime to rewrite their own histories and put a positive spin on their rise to power.

Libraries, schools, and nonprofits can help us fill in these gaps. Part of this involves broadening one’s research to include indie web zines, blogs, and newsletters. Maybe the New York Times never wrote about a critical event online that happened in 2006 and maybe it was never the subject of academic research, but tools like the Wayback Machine can help us uncover some of the pieces. This history is relatively recent, which means that you might be able to get in touch with people who remember key events. And it’s important to speak with the users and low level workers at various tech companies for a more complete picture of what happened. Institutional memory goes a long way with a subject as complex and quicksilver as the internet.

What role do libraries and public infrastructure for the internet play in your research and artistic practices?

I wrote about a third of my book at the Boston Public Library. I would visit every Sunday, take a seat at the Newsfeed Cafe and work for hours. I also worked at the Brooklyn Public Library and the NYPL. It was motivating to be in an environment with other books—with history and a value of history. Plus the solitude in public, the sense of quiet, and the beautiful open windows onto Boylston St all inspired me. That’s my favorite place to work.

Why can't we trust a corporation to do a library's job?

That line comes from a piece by Andy Baio that was written in conversation with an essay by Jessamyn West for a publication we all used to write for called The Message, which was hosted by Medium. Here’s the introductory note from 2014. That publication itself is an example of a website with a complicated history that could provide context for more recent startups like Substack. A few years ago, I wrote about the less than ideal state that The Message archives have been left in, and I returned to this topic recently in a piece for The Guardian. A corporation is not a community. It does not serve a community.

Perhaps the worst offender is Google, which to this day maintains that its mission is to “organize the world's information and make it universally accessible and useful.” But as Jessamyn, Andy, and websites like Killed by Google have shown, the company is careless with archives, and what’s worse is, it maintains the illusion that information that is not on Google simply does not exist. No corporation should have that power, let alone a corporation so unfit to follow through.

What is particularly delighting you right now, either on the internet or off?

It’s just not the weekend until someone has retweeted Daniel Craig announcing “ladies and gentlemen, the Weeknd” on Friday evening. I love that bot so much.